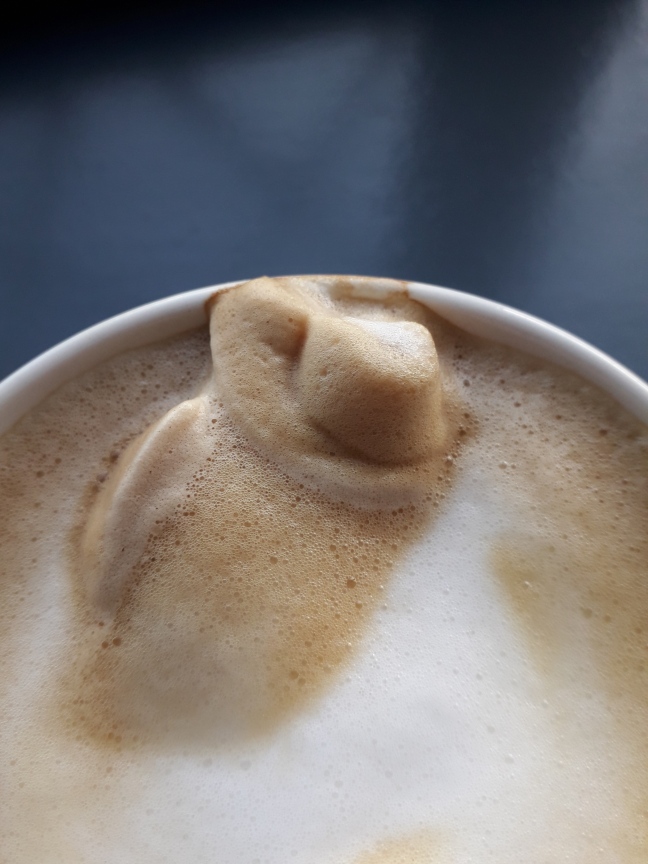 And then one morning I woke up. And he? He was gone…read more

And then one morning I woke up. And he? He was gone. An empty coffee cup next to my bed, the milk cold and lifeless. He had slipped out in the night.

Just when I thought we had connected. We’d discussed our plans, set a timeframe, made a spreadsheet. I’d even changed my status to vegan on social media.

I sat on the sofa hugging a cushion hoping I was wrong, but I could see the trail of milk across the carpet and down the hall.

He had snuck under the door and gone! Just gone!

He can’t have gone far. I mean he was only an inch high so speed was not an issue. Nonetheless I failed to find him. I spent the morning going from coffee shop to coffee shop, ordering cappuccinos and leaving before I drank them. I still do that a lot. It’s been a struggle.

There was and has been no trace of him except the milky sludge trail on the carpet which I had to clean before the landlord inspected. There wasn’t even a note. Nothing. Just gone!

My parents tried to console me. That didn’t last, They are now serving beef at dinner parties as if the whole thing never happened. My mother was back on butter within a fortnight. Gone are the soy lattes, replaced with full cream mochaccinos, mocking me as if my pain meant nothing.

I spend lonely nights sitting on the sofa with the TV on. I don’t watch it. I spend my time scouring the internet for some kind of clue, for someone else who has had this experience.

I have found nothing. It seems there is no place on the internet for dairy based humans. My friends are worried. I am not. I am determined. They keep trying

I don’t want flesh and bone, I want dairy. I am sticking with dairy, there’s not even a question about that on Tinder btw.

The cup is still by my bed. I left it as it was until the stench of milk gone off was more than I could bear. I cleaned it and put it back. It is still there, along with a container of chocolate sprinkles. It’s as if he never left.

I say hello to the cup when I get home from work. I say goodnight and good morning to it.

I buy chocolate sprinkles and just open the tin, letting the sprinkles spread and waft in the air throughout the whole flat. No one visits so it doesn’t matter.

I have all the coffee ads downloaded on my phone. I am looking for clues. I have watched them all a 1000 times. Sometimes I think I see something but then it turns out to be nothing other than poor CGI.

I returned Tom Thumb to the library because that is a fairy tale and my life is not a fairy tale. It was well overdue. I had to ask my parents for the money to pay the fine.

I look at cottages on farms with cows all afternoon at work. I hope. Christmas is coming and I hope.

I thought that vegans might be on side but they hate me. People they say, no matter who they are, should not sleep in coffee made with diary. I tried to explain but they won’t listen.

I am alone. Even my parents have tried to convince me it wasn’t real and even if it was he isn’t coming back.

I have been back to that coffee shop. Its changed hands. I sit at the table where we first met. I am a regular. The same waitress is still there. We are friends now. She is the only person that believes me. Even though she didn’t see it, she has seen the pictures. And she believes me. Or at least she feels so sorry for me that she pretends. And isn’t that the basis for a lot of friendships?

And then –one evening. I could smell it as soon as I walked in the door. The subtle blend of frothy cappuccino milk and chocolate sprinkles. Fresh dairy. My heart skipped a beat. I literally ran towards my room and the cup.., and the cup… and there in front of me on top of the bedside table, there is. There he is. I am looking at him.

I sit on the bed. She looks me up and down. She is too small to look up and down so I just look.

She perches on the edge of the saucer. Then in a less squeaky voice than I imagined she said, ‘I thought you’d have a hat?’

That’s sass for you. Here she is in my house, perched on his saucer and she wants to talk clothes. These dairy types, they focus on the froth. I learned that the hard way

I reach for my cowboy hat that I had hidden under the bed since he left.

It cost me a packet and I had bought it ready for the farm. I had only worn it a few times. Mostly just to work. It never felt quite right in the office.

So we say there staring at each other, her in her hat and me in mine.

‘Where is he?’ I finally asked.

‘Oh honey,’ she said and I knew what was coming.

Nonetheless I went to the kitchen to get some honey anyway. Apparently it makes for smoother coffee than sugar when you sleep in cappuccinos-something about sugar in your shirt. I sat the jar of honey on the dresser next to her. I took off the lid. I could see her trying to inhale the fumes. I didn’t like her already. I waited for what was coming next.

What happened-find out next week-who is she? Does he come back. Read more next week.