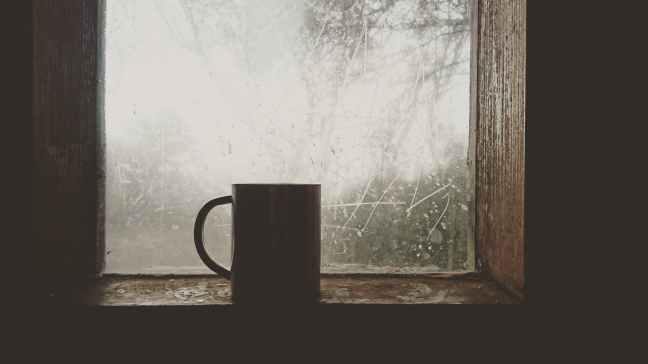 Some people would draw it but I choose words for my pictures. You know the place, you’ve passed through on your way to somewhere else. You didn’t stop and if you did it was just to buy some food  before you drove on. It was nondescript, home to no one you know. You can’t even remember its name. It wasn’t big, it wasn’t small, it was just a town.

The town has several streets and in one of those streets is a house that is slightly rundown. There are net curtains in the windows. The curtains are always drawn. It is not the oldest house in the street but it is the only one that still has wooden window frames. The paint clings on to them desperate not to be flung loose in the wind. Dilapidated, that is the word.

There is never a light on in this house. Never at the front anyway. Someone lives there because the bins are always out on a Tuesday. Its one of those houses that when the occupant is gone, you will look up the real estate agent and go for a viewing just to see what it is like inside. The real estate agent drives past every day waiting-not for a sign of life but for signs of death. It is not the best job in the world.

The front lawn is never mowed but through the gate you can see the back lawn is sort of mowed because the gate is missing a slat. The paint clings on to the gate as well.

Once someone saw fish and chips waiting on the side step to be collected by the owners. The door is at the side and not the front, it is forward of the back gate that is missing the slat. The gate leads through to a garage that has seen better days.

The garage has an asbestos roof and the neighbours want something done but the letters through the box go unanswered. The kitchen is at the back and looks out over what was once the garden. The front room is a lounge. It’s never used. There used to be a dining room at the back next to the kitchen, but long ago he put down carpet and now that is the lounge they use.

The bedrooms are upstairs, soon they will need to be downstairs and the curtains that have hung so precariously to the front windows upstairs can loosen their tenuous grasp and fall to the floor. Their valiant, ragged attempt to protect the occupants privacy over at last. The pigeons nesting in the chimney won’t keep anyone awake at night anymore and the life of the house, such as it is, will be confined to the two back rooms downstairs.

There is a downstairs cloakroom and the occupants will wash in the kitchen sink. It is how it used to be anyway.

An elderly couple, it must be an elderly couple. Nearly incapacitated, slipping through the social services net, not wanting to cause trouble or unable to raise their voices. Which one? Who knows? One of them was a smoker, almost certainly her. Smoking because of the child she had and the ones she didn’t or almost had. The ones that slipped away in bloody messes in the night. Sheets burned in the fire in the rusted tin out the back. New fresh ones bought. Musty and soiled again now but not from her blood, from his incontinence.

She has three dresses, polyester, washable, no ironing anymore. She has a faded pink apron on which she wipes her hands. An unwashed apron, but the stains can’t be seen in the faded light at the back. The sun never makes those windows for most of the day and the light from the small bulb isn’t enough to highlight them and she has put her glasses down somewhere. She is more active than him. He is more grumpy than her.

He sits in the recliner, the chair is half full with his thinning frame, his mind is half empty with the dullness of waiting to die. Why could it not just come, now that he is ready, reconciled? Perhaps after the Arsenal game on Sunday he might pass peacefully from this earth and not have to endure the ache and the effort of toileting himself again. He sits all day in the vinyl chair, looking at the bits hanging off, the bits he tore off when he could be bothered, when he was more active.

Once they were going to get a new chair but the idea slipped from the conversation. He can’t remember when. He wears a thousand shades of brown. A life contracting, all the colour gone. The gradual moving inward in concentric circles until this place and this time is all there is and nothing can possibly pierce their bubble.

They never leave the house, except to go to the shop. And even then it is only her. Occasionally a son comes to visit. The one that caused the smoking to start when he was too small and wouldn’t be quiet. The one who cussed when he looked at the other children and their siblings. No one remembers. He never brings the kids. The place has a smell, its palpable as you walk in. The kids complain about the smell, but are happy with the trade off,  the tenner for xmas and birthdays once a year. They wish for more, but more would mean going there. And no one wants to go there. There is no wi-fi. The windows haven’t been open in years. Maybe they don’t open.

The place is not clean. She does the best she can but really she can’t see the dust. Meanwhile he is so still the dust finds him. A fine film of dirt has burrowed its way into the brownness of his clothes. She doesn’t like to ask him to change too often and it saves money-electricity, washing powder, water, not to wash so often.

There isn’t much money. Some days there isn’t any money. The heating is off, then on but off again because they need milk. They had meat at Christmas but mostly it is just bread, butter, milk. Tea, endless cups of tea. The kettle will go one day and what then? They will boil water on the cooker. And then if the cooker goes, the fire? There is still a fire place in the front room, they will smoke the pigeons out and boil the water on the fire. If they can light the fire?

Of course they can light the fire, in a room upstairs there is a lifetime of newspapers. He used to walk to the shop everyday and get it. She was never in the habit for news and refuses to go everyday for it now. A quiet determined refusal after a lifetime of submission. A statement. Finally a way to say ‘no’.  A way to say I exist independently of you whilst you now exist in the sphere that you so despised but which is wholly mine. I cook. I clean. You sit. It is all you do.  Stuff that into your brown cardigan as you cough on my cigarettes. There is no money for newspaper delivery. There is no money for cigarettes, she makes them last.

Sometimes if there is something left over from the bread and the milk, she buys him a newspaper. He can’t read it in the dim light but the pictures are nice. It is coming to the end, what can happen now that could possibly upset the routine of life as death edges nearer. What could they possibly need to know that a newspaper could tell them.  Is the world ending? For them this world is never ending. The days drag on and the paint hangs on and the circle gets tighter and darker. They look out each day into the garden to see if death has come. But death eludes them, death sits at the edge of the circle, somewhere down the garden silently admonishing them. When living is so little, death has nothing to bring to the table. And so the house crumbles and the wife wheezes and the husbands sighs and the real estate agent drives past in her fancy car. Impatient.

One thought on “Portraits from a town”